she's in my shower, for an hour, she's just washin' and wonderin', and trying to figure me out...


Hello Friends. Right now we are in what feels like the longest ever period of waiting. We are doing lots of testing, lab work, scans, etc to figure out exactly what we are up against. We don’t have a chemo start date yet, but we know there will be chemo. There will also be a port, which I am actually excited about because I have the world’s tiniest, slipperiest veins.  A port will make it so much easier for them to get me the medicine I need, and take my blood so they can get the information they need.

My friend, Dee Anna, suggested I should name my port, because he (or she?) is going to become a huge part of me, and a constant companion while I’m going through this process. She has a friend who was diagnosed 2 years ago at age 28 who named her’s Ellen, because of her obsession with Ellen DeGeneres. Maybe mine will be Portia? Get it Port-ia? Portia and Ellen? You get it.

She's doing great now, and has even started a nonprofit to give a bag filled with things that made her feel beautiful during her journey to other women going through the same thing. So cool. Here's her blog if you're interested:

It's so great to hear stories of people who have beaten this thing. I can't wait to be added to that list.

While we’re waiting to actually get started with treatment, I thought I would take you back to March 30th. The day I found it. It was a Sunday afternoon, and I was in the shower. Connor was out playing racquetball with friends, so I was home alone. I’m just scrubbing like normal, when suddenly I felt something that I hadn’t felt before.

“Was that there before?”

“Does the other side feel the same?”

“Yeah, they feel the same.”

“There is definitely something there.”

“How long has this been there?”

“Don’t be ridiculous, of course it’s not cancer.”
I eventually got out of the shower, but I didn’t stop wondering about it. It was smooth, kind of rubbery, about the size of a small-ish grape, and it moved a little bit when you poked at it. Man oh man did I poke at it. I kept wondering if it would get bigger or maybe it would even just go away. I started googling things. This time google was actually not so scary. Google said it was very common for women of my age to get these hormonal lumps. Also 80% of breast lumps are not cancer. 80% sounds pretty good… plus I’m young, right? I was still nervous though. When Connor got home, we went for a walk and talked about it. We decided to call my doctor just to get it checked out, but we both agreed it was “probably nothing.”

The next day I couldn’t stop thinking about it. Plus, by this time I had poked at it so much that it was sore. I called my doctor that afternoon, and had an appointment to see her the next day. Dr. M felt it, and assured me “it’s probably nothing”. Still we decided it was smart to go get a mammogram. I made an appointment for April 9th.

The day of the mammogram came, and again the radiologist told me “it’s probably nothing”. He said it’s theoretically possible for a tumor to be smooth and round and movable, but it’s highly unlikely. He recommended that I should get it biopsied, but the way he said it really made me think that he was only saying it so I wouldn't sue him.  At this point, I am a little irritated because I feel like I am being silly, and getting all worked up about a highly common benign lump. They even had a fancy name for it - fibroadenoma.

Later that day I was driving home from work, and I got a call from Dr. M. She says she received the paperwork from the radiologist, and she thinks we should get it biopsied. “Really!?” I say. “The radiologist didn’t seem concerned. I don’t know if it’s worth it.” “Oh you should absolutely get it checked out. I’m making an appointment for you.”

I am cheap. And stubborn. So I didn’t want to. I called my mom and my sister to see what they thought. I am so thankful they along with Dr. M convinced me it was worth it to check it out further.

There are a lot of times when I’m looking at my I CAN SURVIVE CANCER notebook given to me by Baylor, or a letter from my insurance saying they have decided my MRI was medically necessary (thanks for that insurance provider…) and I think, “Is this really my life?” It’s still so surreal. I’ve spent hours in tiny tubes getting scanned. I have scientists looking at my DNA to see if I have a known genetic mutation that causes breast cancer. It is hard to grasp that this is real life.

Thank you again for all of your messages and playlist suggestions. The playlist is (Chris Traeger voice) literally the best idea I’ve ever had. Ok not literally, but close. I listen to it, and when each song comes up I remember fun times with the person who suggested it. Plus, the songs are all so great. Some of them are happy, some of them are contemplative, and some of them are a call to be a fighter. All of them are special. It’s been so much fun reconnecting with old friends. Still working my way through responding to your messages. I'm trying to keep most of my thoughts on "normal" things, so it may take me a while, but I am so thankful to everyone who has reached out. Y'all are truly awesome. 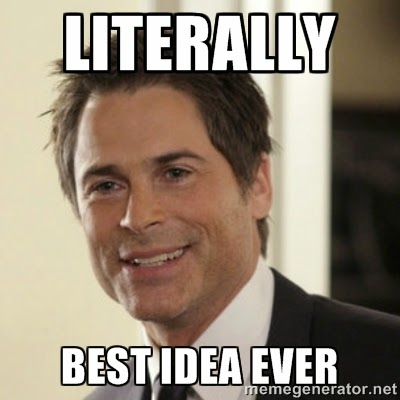